Bioplasma is a multi-effect complex nutrient developed for crop farming in agriculture.

Bioplasma has a complex effect on the combined system of soil and plants. One reason for this can be found in its composition. The plant can take up the dissolved nutritional elements contained in Bioplasma through its root system as well as through its leaves. The secondary and micro elements contained in Bioplasma play an important role, supporting the physiological and biochemical processes as well as the uptake of macro elements and the harmonic development of the plant

Algae cells are connected to plant cells by means of cytoplasmic filaments. The concentration of nutrients is very high in the algae cells contained in Bioplasm, and so the nutrients infiltrate into the plant cells under the effect of diffusion (difference in concentration) and are utilised directly there. 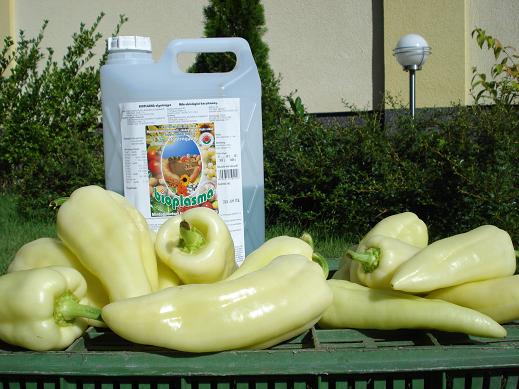 The results achieved with different plant species (like cereals, tomato, green pepper, cucumber, fruits, flowers, etc.) prove that the crop of these plant exceeds the usual average yields, while the nutrient value, the colour and the flavour of the crops produced by using Bioplasma become also much better. The resistance of plants against diseases and pests becomes higher. In many cases, diseased plants have started to develop again after the treatment with Bioplasma. It is especially effective if the uptake of nutrients through the roots is restricted (e.g. by drought, insects damaging the root seriously, temporary anaerobic soil conditions, etc.).

When compared to other leaf fertilisers, this product has the advantage that the amounts of macro, secondary and micro elements in the base composition can be adjusted (increased) according to the phenological phase of the plants. The product applied to the surfaces of leaves does not get dry or washed down from there. In certain phases of development and growth, the plant requires larger amounts of certain nutrient elements than those that can be taken up by the root from the soil. This relative deficiency of nutrients can be eliminated effectively by the application of concentrated Bioplasma. The lack of certain crop nutrients may cause abnormalities of physiological development, influencing the productiveness and fruit quality of the plants. Such deficiencies may decrease the resistance of plants to diseases, aridity and cold, as well as the shelf life of the product. Bioplasma with concentrated nutrient elements can be used for preventing diseases, eliminating temporary nutrient deficiencies occasionally, and making up for deficiencies of elements that can be integrated in the plant tissues permanently. The plant can take up the concentrated "oven-ready" nutrients of Bioplasma with low energy expenditure immediately, and so they can exert their effect intensively. The concentration process is carried out by means of photo-bio-fermentation technology.

Bioplasma consists of a special algae stock grown on a nutrient mixture of special composition by means of the so-called photo-bio-fermentation technology. As the number of algae increases, more and more nutrients are converted into materials that have a chemical structure advantageous for the plants. The plant nutrient that has been generated this way contains algae in optimal proportion and in a form that enables the plant to take up and integrate it immediately, and all other elements that can be necessary for the plant during their physiological development.

Bioplasma is marketed in the form of green liquid with a pleasant odour. It is a concentrate that must be used after proper dilution with water according to the instructions for use or expert advice. It is a non-toxic, non-combustible and non-explosive material, and its use does not involve any hazard for humans, animals or the environment. Waiting time after application: 0 day. Bioplasma is an environment-friendly crop feed that is utilised by the plant entirely (100% utilization) and contains live algae of high nutrient value and energy content.

Due to these properties, Bioplasma can be used for the traditional and organic production of any plant culture.

This fertilizer solution made for crop farming stimulates the growth of plants and supplies nutrients for the plants, including living algae, macro, micro and secondary elements as well as vitamins and amino acids produced by the algae.

This product is suitable for improving the productiveness of soil, supporting the restoration of natural soil conditions, increasing yields and utilizing the stubble-field. It contains non-pathogenic fungi as well as nitrogen-fixing and phosphorus-mobilising bacteria.

The products of the product range Chlorella Micro Algae Capsules are excellent dietary supplements due to their good nutrient values and the vitamins, amino acids, micro and secondary elements of natural origin.

This preparation is used for low-degree burns, skin injuries caused by hot water, sunshine or UV light and insect-bites. It soothes the skin, mitigates inflammation and promotes the healing process, providing complex nutrient supply for the damaged skin.